To have the optimal experience while using this site, you will need to update your browser. You may want to try one of the following alternatives:

What Fire Damage Risks Are Associated With Common Countertop Appliances Found in the Kitchen? 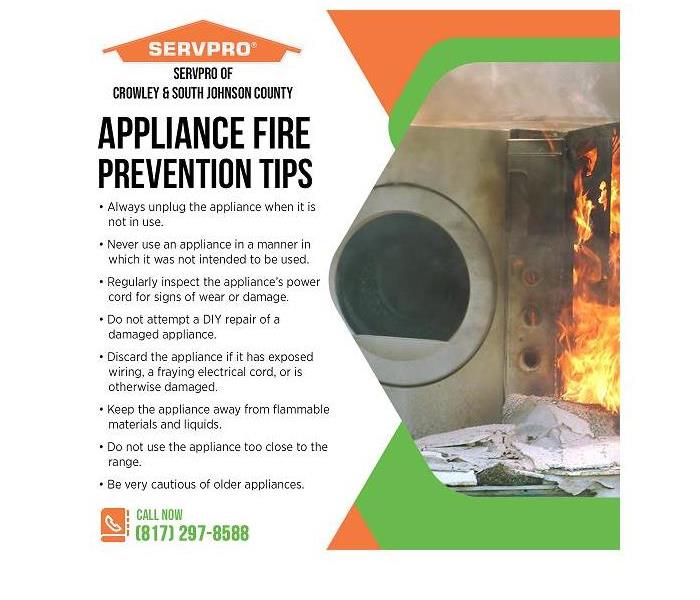 Fire damage in Grandview, TX, kitchens can occur for a variety of reasons. The stove is a leading culprit for kitchen fires, and the National Fire Protection Association reports that ranges and cooktops “were involved in 61 percent of reported home cooking fires, 87 percent of cooking fire deaths, and 78 percent of cooking fire injuries.” However, homeowners should not underestimate the destructive potential of smaller countertop appliances and should abide by fire safety best practices in order to ensure that the kitchen remains a safe place.

Microwaves are one of the top causes of fires started by countertop appliances in the kitchen. Common microwave fire hazards include overcooking food, heating food in containers that are not microwave safe, and sparking, a relatively common microwave malfunction.

According to data from the Federal Emergency Management Agency (FEMA), toasters, along with toaster ovens, caused 1,416 fires over a four-year period. An insurance provider cautions, “Toasters have electric elements inside that are used to brown your bread or bagel. If the toaster fails and doesn’t turn off, a fire can start. Never leave a toaster unsupervised, and remove the crumbs on the bottom of the toaster regularly. In addition, inspect the electric elements for stuck crumbs.”

While coffee makers may not be the first appliance that homeowners think of when they consider fire risks, certain types of coffee makers can be a fire hazard. Special care should be taken in the case of cappuccino machines, which use high-pressure steam to create the frothy drink.

Consumer Watch explains, “Coffee makers are notorious for being a source of burns and fire, especially when an automatic shut-off mechanism is not present in the machine. If the unit does not shut off or is not turned off after use, the unit may continue to heat the carafe and plastic parts. Burns, melting of components, and even home damage are not uncommon.”

Compared to other appliances like microwaves and toasters, slow cookers are less likely to catch fire. FEMA reports that, from 2012 through 2015, slow cookers caused 103 fires, as well as nearly 1.6 million dollars in property damage costs.

Pressure cookers add another factor of potential danger to the cooking process with their use of high-pressure steam to cook food. While pressure cookers, as well as multi cookers that combine pressure cooking and slow cooking functions, are occasionally the cause of fires, the main concern is the potential for the cooker to produce a steam explosion due to misuse or a malfunction.

In addition to the appliance listed above, homeowners often have many other types of countertop appliances in the kitchen, including waffle irons, electric grills and griddles, blenders, and air fryers.

By practicing the safety tips listed below, homeowners can minimize the fire damage risk associated with countertop appliances.

To learn more about fire damage restoration in Grandview, TX, call SERVPRO of Crowley and South Johnson County at (817) 297-8588 or email the team at office@SERVPROcrowley.com